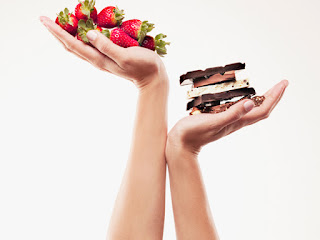 5:48AM, Jan 24
Some fatty foods dress up in health foods’ clothes, ready to trick us all. But we’re calling their bluff…
You might think you’re doing yourself (and your bod’) a favour munching on the foods below. But stop right now: did you know that appearances can be deceiving and even though it looks healthy, it doesn’t mean it is. Quelle horreur. Here are some of the main offenders…
Wraps. They’re so much thinner than a slice of bread, so they much be loads better for you, right? Wrong, with a capital W! Most wraps are just as processed as white bread, with some even hiding three times the carbs and calories in their skinny appearance. Instead, try an open-faced sandwich, with chicken and salad sitting on top of one slice of whole grain bread.
Green tea energy drink. Anything with green tea in it sounds like it should be synonymous with good health. But, this is another cheeky thing that hides behind a healthy exterior: one bottle of store-bought ice tea contains the same amount of sugar as 37 lollipops. Bin it. Water with a squeeze of fresh lime or lemon is a lot better for you. Or if you really need a hit of flavour, try a small dash of apple juice with soda water, so think one part juice, eight parts water.
White rice sushi. Sushi is a carb bomb waiting to happen and a large roll can have the equivalent to four slices of bread. Yes, one California roll equals two sandwiches! But, we all love sushi so of course we are still going to eat it, but try to eat smaller portions, opt for brown rice varieties and substitute half of your sushi meal for sashimi, which is uber good for you.
Caesar/Waldorf salads and the like. Obviously salads are the healthy eater’s holy grail, but be warned, all salads aren’t created equal! Adding any rich dressing (think ranch, mayo etc.), lots of cheese, nuts or fried anything will take your virtuous salad from super healthy to secretly naughty. The best option is to dress your it with lemon or a bit of balsamic vinegar because lots of dressing options have hidden nasties.
Dried fruit. Cup-for-cup the dried varieties have eight times the sugar and calories than their fresh counterparts. AND lots of brands even added sugar to dried fruits, like cranberries, to make then sweeter. Proceed with caution.
Granola. Oats are great, nuts (in moderation) are great and honey (again in small amounts) is great too. But add all of these together and then crisp them in oil, and you have one delish, but extremely high-calorie cereal. Try oats with fresh fruit and nuts instead or a whole grain cereal that isn’t fried or baked.
Bran muffins. The fibre in wholegrain muffins is great, but when you consider all the butter and sugar that goes into them, even the wholemeal variety, you might as well treat yourself to a slice of cake.
Rice cakes. It’s not that these snacks are really bad for you, but that’s what they are, just snacks. They are highly processed (particularly the white varieties) and contain no fibre or protein, so they won’t satisfy you. You might think you’re doing yourself a favour by eating a few for lunch, but you will actually just end up starving in a couple of hours and then overeating.
Juice. Like dried fruit, juice is a poor alternative to the fresh version. It contains all of the sugar from the fruit, but none of the fibre and good stuff, so basically it’s empty calories because it won’t fill you up either.
Favoured, fat-free yogurt. Just because something is fat free, doesn’t make it healthy. Take no-fat yogurt, it usually packs a huge sugary punch, with some small tubs having up to 15 grams of the white stuff! If you can’t live without your yogurt fix buy some low-fat Greek yogurt and add flavour with fresh fruit.
Protein bars. Gym junkies world over chow down on these like there is no tomorrow, but if you actually flip them over and read the nutritional info, you’ll see that they are high in artificial ingredients, fillers and sugar. You may as well eat a chocolate bar!
Posted by Vanessa Pike-Russell at 15:13