The Benefits of Wheatgrass Juice

Article on the benefits of Wheatgrass juice by Vitality4life.com.au 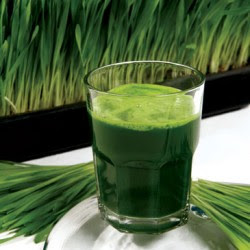 Wheatgrass is one of the most powerful Superfoods in the world and is so potently abundant with rich nutrients, vitamins and enzymes, enough so to being new youth and vitality to those who enjoy wheat grass daily or even weekly. To say it simply, 30mL of freshly squeezed organic wheatgrass juice (1 shot) is the equivalent to in nutritional value to up to 1kg of leafy green vegetables!

Wheat grass can provide the body with 98 of 102 elements including calcium, magnesium, potassium, iron, zinc, phosphorus but also many amino acids, vitamins and minerals to give a boost to your health. More than that, wheatgrass is 70% chlorophyll, which provides more energy than any other element. Produce which contains chlorophyll builds red blood cells, - aids bloodstream function and improves blood sugar problems. It delivers high levels of oxygen to the brain and makes body tissue function at optimal levels. Nutrient-fuelled chlorophyll absorbed by the body enters tissue, refines them, rebuilds them and rejuvenates them!

More benefits of wheatgrass include:

• Increases red blood cell count and lowers blood pressure
• Cleanses the blood, organs and digestive system
• Increases metabolism
• Stimulates the thyroid gland which can combat obesity, indigestion and other associated diseases
• Stimulates enzyme activity
• Helps to alkaline the blood, reducing over-acidity in the blood
• Acts as a powerful detoxifier
• Protects the liver and blood
• The enzymes and amino acids found in wheatgrass can protect us from carcinogens

When wheatgrass is juiced, using juicers like the Oscar Neo DA 1000, nutrients enter the body, cleanse organs and provide essential vitamins and minerals which our bodies need to operate. Common centrifugal juicers are not able to juice wheat grass due to the high speed extraction method. Cold press juicers, utilising a gentle squeezing method extract maximum amounts of juice from grasses and keep all its nutrients still intact! This means your body can enjoy the benefits of wheatgrass straight away and in the most pure form.
There are many ways users can drink the benefits of wheatgrass. Blenders, like the advanced Bio Chef Blender can be used to blend the grass with with fruits or vegetables and make superfood smoothies! Whether its by extraction or my blending wheat grass, both ways ensure that you get maximum benefits with minimum effort and a daily intake of energy.
Wheatgrass has always beent he greatest living juice for health-goers who detox as it has a big role in cleaning heavy metals from the body, while giving you more energy, strength and endurance. It’s cleansing properties, purifying attributes, and ability to feed the body, all contribute to boosting the body’s immune system.
Wheat grass is considered a natural healer in the world of herbal medicines due to properties such as chlorophyll, qualifying it as an anti-bacterial.

It has been researched by the American Cancer Society that wheatgrass can help to cure bronchitis, fever, infection, and skin and digestive disorders.

Wheatgrass is also a great natural alkalizer, it cleanses acids from the body and can even balance our natural PH levels. This is one of the main reasons why drinking wheat grass juice can assist minimising illnesses.
Vitality 4 Life suggest doing something good for your health by drinking wheatgrass juice. Even a small shot of wheat grass everyday would provide you sufficient nutrients and mineral intake to improve your health and boost your energy!
You can grow your own wheatgrass and have this ultra rich juice everyday naturally coming from your own garden. Vitality 4 Life sell a range of the best sprouters on the market. Choose from our range and grow your organic superfood in the comfort of your own home.

Isn't wheat acidifying for the Body
Fully grown, harvested, processed, milled and stores wheat is, yes. However, just like with most grains, when sprouted it is very alkaliine. This is highly evident in the case of Wheat Grass. The benefits of wheatgrass juice as an alkaliser are unsurpassed.

Does Wheatgrass contain Gluten?
No, wheatgrass does not contain gluten. In fact, wheatgrass is a suitable food type for those with a gluten intolerance. Although wheat grain contains gluten, wheatgrass is not a grain, it is a green vegetable and as such contains no gluten.

How do I avoid mould when growing Wheat grass?
Mould is the most common problem when growing wheatgrass (in fact it is often the only problem). It can be identified as white blobs forming (normally around the base of the wheatgrass stalks) when it is alive and black spots when it is dead. The following are all suggestions for preventing mould formation on your home grown wheatgrass.
Do not soak your wheatgrass seeds for longer than 8 hours.
After soaking, plant the seeds as soon as you have drained them.
Try and keep your growing micro-climate from becoming too hot or too humid, a temperature around 30ºC is recommended.

Is mould formation on wheatgrass of any significance?
Mould formation on wheatgrass can be of great significance. Some people are allergic to mould and it is also bad news for people who suffer from asthma.
It has been reported that intake of mould can result in instant body reactions such as headaches, nausea and even body hives.
It is therefore important to at least cut well above any mould that has formed when harvesting your wheatgrass.
It is also recommended to empty and sterilise your trays after harvesting to discourage any related mould growth.

Can I repeatedly trim and grow the same tray of wheatgrass?
Although it is possible to regrow your wheatgrass after its first cutting and then re-harvest the same batch, it is not a recommended practice as the second harvest will not contain nearly as many nutrients as the first. This is because a great deal of the nutritional value in wheatgrass comes from the seed as it sprouts. This nutritional content is contained within the first harvest. As well as the loss of nutritional content, re-growing the wheatgrass increases the chance / growth of mould.

Our Recommendations for a Wheatgrass Juicer:

Grow your own and enjoy the benefits Wheat Grass Juice: